Diary Index Book Reviews focus on the role and representation of diaries or journals in contemporary fiction. Warning: may contain spoilers. 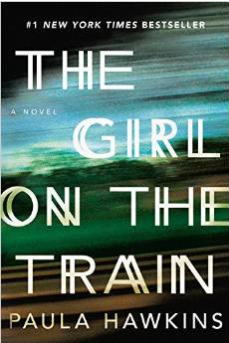 Paula Hawkins, The Girl on the Train (Riverhead Books, 2015)

I would describe Paula Hawkins’ The Girl on the Train a “not-diary diary novel.”

Mid-way through the novel, one of the three main characters recounts how her therapist encourages her to keep a diary:

“[The therapist] … suggested in this afternoon’s session that I start keeping a diary. I almost said, I can’t do that, I can’t trust my husband not to read it. I didn’t, because that would feel horribly disloyal to Scott. But it’s true. I could never write down the things I actually feel or think or do.”

And that seems to sum up the novel’s attitude towards diaries: Diaries are true; they record “actual” feeling and thoughts. In a novel that is all about the instability of memory and the evasion of truth, diaries would appear to have no place.

And yet … and yet the novel has a very diary-like structure. Chapters are identified by the name of the narrator — highlighting their status as first-person narratives. Each narrator’s account is highly interior and self-revelatory; we are privy to shameful acts, deep secrets, and self-discoveries that the narrators hide from the rest of the world. And, chapters are structured according to dates, like most diaries.

This emphasis upon chronology is one of the most enjoyable aspects of the novel because of the parallel it introduces between the daily narrative and the daily commute. The first narrative voice, Rachel, initially organizes her “entries” according to her morning and evening commute on the train into and out of London. This emphasis upon dailiness is highly diaristic; Jennifer Sinor’s wonderful study of the diary argues that dailiness is “the single most defining characteristic of the diurnal form and the central quality that sets diary writing apart from other forms of writing like memoir, autobiography, or literature.”* The daily structure also introduces a serial quality to the novel and is one of the reasons the book is such an effective page-turner. I’m writing an essay on a 19th century serialized diary novel and thinking about the parallels between periodical seriality and diary seriality, which made me all the more aware of how well Hawkins exploits this effect in her novel. Just as readers of serialized fiction eagerly awaited the next installment in a multi-part story, so The Girl of the Train propels the reader forward by the unfolding of the mystery, as each new part of the text promises to reveal a hidden truth.