A diary is a journal but a journal is not a diary.

The dictionary yields this curious logic. According to the Oxford English Dictionary, a diary is “a daily record of events or transactions; a journal,” a meaning it tracks back to 1581. But, the OED entry on the word “journal” does not employ the term “diary” except in a sub-entry and as a negative example: The journal is a “a record of events or matters of personal interest kept by any one for his own use” — which sounds an awful lot like a diary, were it not followed by this disclaimer: “Now usually implying something more elaborate than a diary.” Instead of using “diary” to define “journal,” the OED provides a host of other comparative terms including: day-book, record, service-book, itinerary, account book, logbook, daily newspaper, etc.

The journal, it seems, is many things, while a diary is only one thing, though that thing is very like a journal. Which is many things.

“Journal” has a number of other rich, sometimes obsolete associations: religious, nautical, financial, legal, mechanical, related to mining, related to travel. My favorite is the use of “journal” (from the French) to refer to the amount of land that can be plowed in one day. What a wonderful metaphor for the work of keeping a daily diary: how much land did you plow today?

The usage of the word “diary” in print over time:

The usage of the word “journal” in print over time:

Insofar as this is reliable data (and I am not sure whether it is*), it would appear that “journal” has had a wider and more consistent usage for a longer period of time, whereas “diary” had followed a track upwards from relatively little appearance in print in 1800 to frequent appearance today. Of course the host of meanings attached to the word “journal” also explains its frequency.

In my own experience, “diary” is a word I long associated with antiquity — something kept with a quill pen — and with girlhood — the pink book with its little key. Neither was an image I could relate to. It was in the 1980s that I started hearing the word “journal” and particularly in the verb form, “to journal” — terms I found engaging. I thought of myself as journaling — I addressed my journal as a journal. It is only recently as I’ve started to study historic diaries that the term “diary” has become a more relevant one. I noticed a shift in my own writing, which is that I now write about my diary as a diary (though not with the “Dear Diary” address). Thinking of myself as participating in a literary tradition with eighteenth- and nineteenth-century women who kept diaries has given me a very different perspective on the diary as a form. But such is the mutability of language that I might again someday think of what I do as “journaling.”

* The Google Ngram Viewer is a great tool for “armchair historians” (as Ben Zimmer writes), but I hesitate to place faith in the Google digital book corpus. Among other things, the privileging of print matter in determining word history is problematic — all the more so if what you are interested in is unpublished or manuscript materials. Does the print history of the word “diary” actually tell us more than the use of the word “diary” in actual — and generally un-digitized — diaries? 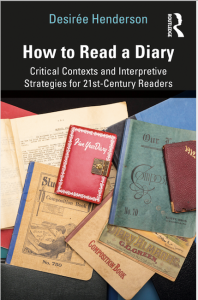